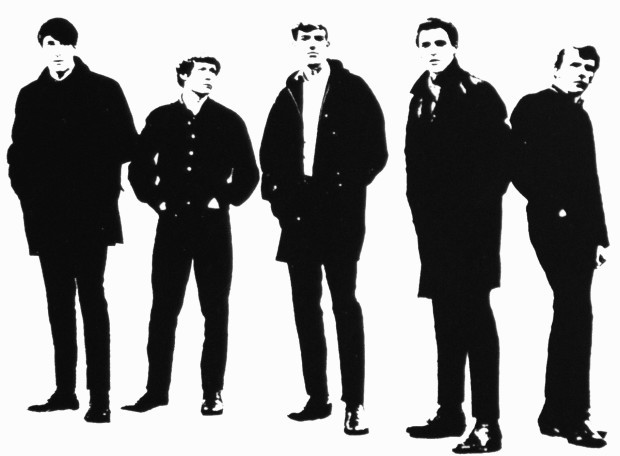 Rolling Stone isn’t good for much these days, but it did turn me onto a great band with possibly an even greater story: Seattle-area garage rockers The Sonics.

In the mid-1960s, the outfit released two raucous albums, Here are the Sonics and Boom. Sonically, the music would be considered proto-punk before proto-punk existed. Think the Ramones if that group was more into Little Richard than surf pop or Iggy and the Stooges minus the Death Trip.

Soon after that second album, the band broke up, save for a couple random one-offs here and there. Despite little name recognition amongst casual music fans, hugely successful acts like Nirvana, the White Stripes and punkers and alt-rock acts like the Dead Boys and the Fall have cited The Sonics as major influences upon their sonic palette.

In the late-2000s, The Sonics officially reunited and in 2015 released This is the Sonics, an album that sounds like the band was frozen in time. Modern-day improvements in production aside, vocalist Gerry Roslie’s yelp hasn’t changed and the band plays with the same speed and verve as their seminal works.

Rippin’ garage band records two albums, disappears for 50 years and its members go off to live “normal” lives, leaves a strong impression on some of the most influential popular acts of the last few decades, then returns to pick up where it left off. Sounds like the plot to a movie, right?

Director Jordan Albertsen agrees. For the past seven years, he’s been working on a documentary about the band, Boom! A Film About The Sonics. After getting no traction from major studios and financiers, he’s taken to crowdfunding, launching a campaign on IndieGoGo to raise $50,000 for completion of the film. Donors will get some pretty cool goodies for their participation. Inquisitive folks will see my donation reserved me a blu-ray copy of the film after its release.

You can scan through the IndieGoGo page and learn more about how the money raised will be used. The film looks to be legit, with the band itself participating and interviews with noted punk/underground rock names like Social Distortion’s Mike Ness comprising core components of the documentary.

I wanted to help Jordan Albertsen get the word out about his IndieGogo campaign and help tell his story about making the film and his interest in The Sonics. Turns out, the story of the band is a personal one for him and it’s not just about a kick-ass rock band, even if it’s a movie about a kick-ass rock band. He was cool enough to do an interview about the topic with me; his answers will be in italics.

When did you first listen to the Sonics? What about the music drew you to them?
I was probably around 12 or 13 when I first heard The Sonics. My dad walked by my bedroom one day when I was blaring Nirvana’s “Smells Like Teen Spirit.” And he paused and looked in at me and said, “You should check out The Sonics” and then walked away. Now remember I was a teenager, so anything recommended to me from my parents was instantly not cool. Jump ahead a couple months later and I was reading an interview with Kurt Cobain and he was talking about this band, The Sonics. And I was like, who the fuck is this band? Who the fuck are The Sonics? So I swallowed my pride and asked the old man. He told me that they were this band that he used to go see play these dances back in the day. “They were completely insane, nobody played like The Sonics,” he said. I was always into punk rock and heavier music, so insane sounded great to me. Now this was pre-iTunes, YouTube, Spotify…you actually had to DIG for music. So we managed to hunt down an old copy of The Sonics: BOOM! at a used book store. I’ll never forget the moment that CD started to play. First song, Cinderella. What the fuck is this!? This shit is how old!? Before the Ramones, Dolls, even before the Stooges. It was a game changer for me. I was completely blown away. It’s the recorded beginning of everything I love about rock and roll.

According to the IndieGoGo story behind the film, it was soon after the reunion show that you decided to make a documentary about them. What was it about the show and the band that compelled you to make that decision?
Well it was really more about my relationship with my father. Music and going to concerts was really where we started to bond in a lot of ways. AsI grew up, him and I became a lot closer. And I guess a lot of that could be traced back to that moment when he first told me about The Sonics. So throughout the years we would always talk about the ultimate band reunions. The conversation would always circle back to “How fucking rad would it be if The Sonics played again?” No way. Never going to happen. Until it did. When they first announced their hometown reunion show I flew up from LA and we went. And the show was…It’s hard to explain. There’s just something so primal and dangerous about that band. And seeing it live just set me off. And I just knew…the world needs to know about this band.

You’ve been working on this for 7 years. Can you chart the progression for me? Has it been a different goal each year? Were x amount of years research-based?
It’s been a loooooong, very difficult process. To say the least. I don’t think there’s enough room in your blog to cover the painful progression. Haha.

Logistically, has funding been the only major hurdle to filming it?
Funding has been the biggest hurdle. Absolutely. From the beginning I always set out to make something cinematic and well produced. I didn’t want to scrape something together shot on shit cameras. This band deserves something just as badass as they are. And unfortunately that costs money. So we spent years going through the Hollywood grind trying to put this together. It was a total nightmare. Nobody got what we were trying to do. But I refused to give up. I have to tell this story.

How much of the film, as related to your vision of the final product, is completed?
We’ve shot about a quarter of the film, give or take. There’s a lot to this story. And a lot of people are involved. We want to make sure we do this right, so there’s a LOT that needs to be filmed first. And I have to say, I’m excited for people to see what we’re doing with this film. Even die-hard Sonics fans are going to be surprised with what this uncovers. This wont be your typical rock-doc.

Why crowdfunding? It seems like the story of the Sonics, from influential up-and-coming group to 50-year hiatus, is ready made for a Hollywood feature.
Right?! I agree! But Hollywood wasn’t doing shit to help us. So we decided to put this into the hands of the music fans.

I don’t know about you, but when I dig a band/artist, I get obsessive about them and try to learn every detail. I imagine you learned something new about the band and/or gleaned some sort of newfound appreciation or understanding of the group. What have you learned in this process that you didn’t know previously about the Sonics?
Oh I’m the same way. I get beyond obsessive, it drives my girlfriend nuts. Music is everything to me. And with The Sonics, I’ve learned a ton. These guys are so humble and unaware of the massive influence they’ve had on popular culture. I’ve never met such a chill group of guys. As far as the rest, well…you’ll have to wait to see the film.

Who are some of the musicians you’ve interviewed for the project thus far?
We really haven’t started filming that part yet. We’re hoping that after launching the campaign and releasing the trailer that we could start to get some attention from other musicians who were inspired by these guys.

Was the band aware of its legacy going into the reunion? How have the members reacted to their suddenly much-higher profile (Rolling Stone features, etc.)?
You know, it’s crazy how humble they are. I think that it still hasn’t really sunk in for some of them. As far as them being aware of their legacy and all that, I don’t think they worry much about that. They’re just a group of guys that love to rock the fuck out. And somehow, they still manage to do it better then anyone else.

How has the creation of the documentary pushed you as a filmmaker? What new skills have you picked up along the way?
Patience.

What’s the biggest difference between this film and your first film, The Standard? Is a documentary easier or harder than a fictional piece?
I’m not going to lie to you man, getting this going has been a real struggle. And we’re still just getting going so it’s hard to really answer that one.

When are you looking to have it completed by?
We’d like to have it released sometime in 2017.

If you’re interested in learning more about the music of The Sonics, check the band out on Facebook and Spotify.