WrestleMania 34 takes place this Sunday and, on paper, it seems like an event worthy of that moniker “The Grandest Stage of Them All.” The overly-long spectacle that serves as WWE’s season finale is absolutely loaded, boasting the best lineup of matches the company has advertised since well before the demographic they market to was even born. After a couple years of WWE seemingly openly spiting its audience, the sky is the limit for an extravaganza that can only be described as the best thing to spend SEVEN HOURS watching on your Sunday night.

Wrestling is the best because it never ends – it’s like comic books or soap operas, but even more ridiculous and fun since it’s performed in front of thousands of people on live television. Even though it is ongoing, all stories build to WrestleMania. That’s when we go from your typical arena to a football stadium full of fans from all over the world losing their fucking minds as WWE works to bust out all the Trumpian superlatives you can imagine with the BIGGEST, ICONIC, MOST IMPORTANT, LIFE-ALTERING, LEGENDARY, MAGNIFICENT moments. 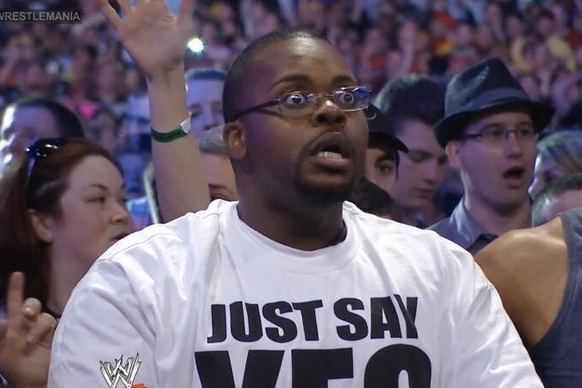 Fear not, as it was not all doom and gloom for the New Orleans crowd that night. Daniel Bryan, the most universally loved star WWE has had since Stone Cold Steve Austin, triumphed in the main event to send the crowd home ecstatic.

The following year, WrestleMania 31 seemed only okay on paper. Then we got a cool ladder match with Bryan winning the Intercontinental Championship. Sting, the lone star from the ‘90s to never show up in WWE, had his first match for the company and it was a total nostalgia romp. Randy Orton hit a wild RKO on Seth Rollins. Rusev rode out on a tank, UFC star Ronda Rousey beat up Stephanie McMahon and Triple H. And since the crowd was very vocal in its opposition to WWE’s insistence that Roman Reigns be the face of the company, the E made sure to send the crowd home with the most wild thing they’ve ever done in the main event of WrestleMania.

When it seemed like Roman Reigns was about to make a comeback and win the WWE Championship from Brock Lesnar, Seth Rollins stunned the crowd by choosing the middle of their match as the moment to “cash in” his Money in the Bank contract – good for a guaranteed championship match any time, anywhere. In just over a minute from the time he had hit the ring, Rollins picked up the win and sprinted back up the stage with the belt while the crowd went absolutely bananas. It was the type of twist that can make wrestling fun.

Unfortunately, the following year’s show only involved the word “fun” if you’re saying there was a dearth of it. Mania 32 was forgettable and felt insanely long, capped off by a boring main event as Roman Reigns was finally coronated as the top star when he beat Triple H in a match that lasted nearly half an hour. The crowd remained as unenthused about his rise as they were the year before.

33 seemed destined to be a stinker, but started surprisingly strong. The pre-show had a good Cruiserweight Championship match, and got WWE some mainstream attention with NFL star Rob Gronkowski joining in on the action during the Andre the Giant Memorial Battle Royal. On the main card, Shane McMahon and AJ Styles had a wicked fun match, despite the former not being an actual wrestler. The Hardy Boyz made a surprise return and won the Raw Tag Team Championship. And then things got really boring, ending with a second straight coronation for Reigns as he defeated the Undertaker in a snoozefest, and seemingly banished the Deadman into retirement. Again, the crowd was totally against Reigns, despite WWE’s insistence that he’s a cool guy we should all love.

That brings us to WrestleMania 34. Stunningly, the card features what will be a third consecutive attempt at a coronation for Roman Reigns as he faces Universal Champion Brock Lesnar in the main event. In what possibly may qualify as the wrestling version of Stockholm syndrome, people seem pretty cool about that being the case this year. Reigns has put in a lot of work to become a leader in the company, even if the fans don’t like him quite as much as WWE wishes they would. A fourth straight Reigns main event is also easier to stomach when you consider all of the fan service we’re getting as well.

On the pre-show, Cedric Alexander and Mustafa Ali face off for the vacant Cruiserweight Championship – two stellar performers who will go all out to put on a show, and the crowd will be behind both guys. That will likely set a good tone for the evening that the main card will ramp up. Rusev has gotten himself so over with the crowd recently thanks to declaring every day Rusev Day and having Alex English sing to introduce him, so he was pulled from the meaningless Andre Battle Royal on the pre-show and inserted into the United States Championship match. The Rusev Day chants will be deafening when he hits the ring on Sunday.

Of course, what would WrestleMania be without the Undertaker? Despite essentially retiring last year, John Cena has spent the last several weeks calling him out on Raw, but the Deadman has yet to answer the challenge. With no match officially on the books, there’s some uncertainty around what we’ll see. In wrestling, you don’t have have somebody talk up a match for weeks if it isn’t happening. Cena and Undertaker are two of the biggest stars WWE has ever had, but since Cena’s ascension to the top over a decade ago, their paths have never crossed. When they come face to face in the middle of the ring at WrestleMania, no matter how old and broken down Undertaker may be, it’s going to be a moment.

Remember – WrestleMania is very Trumpian with the superlatives. So it only makes sense that literally the biggest and most important women’s wrestling match would take place on Sunday. Charlotte Flair, daughter of the legendary Ric Flair, is one of the best athletes and performers on the roster. She will be defending her Women’s Championship against Asuka, the super popular Japanese star who has been undefeated since joining WWE in 2015. In WWE’s developmental brand, NXT, she held the Women’s Championship for a record 523 days before vacating it and moving up to the main roster. WrestleMania is all about the best of the best, and that’s what we’re getting. This is the first time women’s wrestling has been put on that next level on the big show.

Ronda Rousey makes her in-ring debut this Sunday when she teams with Kurt Angle, wrestling his first WrestleMania match in 12 years, to face Stephanie McMahon and Triple H. That’s a ton of star power. Rousey’s success and mainstream appeal while with the UFC is the reason WWE realized its women could be more than sex objects, ushering in the era where women are presented on their programming as serious athletic competitors. Rousey may be a little rough around the edges now, but her joining WWE will ultimately be a great thing.

And it is a wrestling nerd’s dream as WWE Champion AJ Styles faces Shinsuke Nakamura. Styles has only been with WWE for two years, though he established himself as an all-time great in other companies over the years. In his short time with WWE, he has cemented himself as a future Hall of Famer thanks to two entertaining WWE Championship reigns and multiple classic matches. Nakamura was highly decorated in New Japan Pro Wrestling, jumped to WWE, found success in NXT, but has yet to really have his coming out party on the main roster. After winning the Royal Rumble match in January and earning a title shot against Styles, Nakamura finally seems poised to ascend. These two had a humdinger of a match in NJPW, and we can expect lightning to strike twice on Sunday.

The matches described here are only half of those taking place at the event, which is currently slated to last SEVEN HOURS – a two hour pre-show and five hour main card. It is comical that WrestleMania is turning into an endurance contest, but WWE has wisely stacked the card with things the fans will get hot for to try and keep the viewing public from falling asleep. Will it work? Who knows. But on paper, this could be something special.