Improbably, the New York Mets are back in the playoffs this October after an incredible run starting in mid-August through the end of the year.  In a season where they lost almost every major star, a fan favorite shined through again.

The Mets were supposed to have the best rotation the league had seen since the Braves (regular season) dynasty in the nineties.  You don’t take pictures like this as an organization unless you believe in your pitching staff. 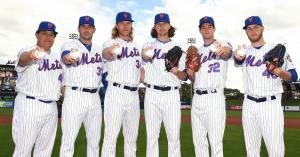 Matt Harvey, Noah Syndergaard, Jacob DeGrom, and Steven Matz were supposed to dominate the conversation all season.  With the veteran Colon, a placeholder until Zack Wheeler returned from Tommy John surgery after the All-Star break.  Since it’s baseball, and the Mets, things didn’t go according to plan.

Before the end of the regular season, the Mets faithful watched in horror as The Dark Knight never got going and never got healthy before ending his season prematurely.  DeGrom and Matz were shutdown for the end of the regular season and playoffs.  Wheeler’s comeback never got off the ground.  Even Syndergaard, has dealt with bone chips in his elbow for the majority of the season.  The only thing Mets fans and the organization could count on was “Big Sexy” Bartolo Colon taking the mound every fifth day and providing a quality start.

Since coming to the Big Apple Colon has thrived in the internet era, and has seen new life as a gif, vine, and video superstar.  Whether it be jiggling his rotund belly, swinging wildly and losing his helmet, or going behind his back to get the out at first, the 43-year-old former ace has won over the Citi Field faithful.

What’s been lost in his internet celebrity and new moniker that’s come with a host of apparel, is that Colon has led this star-studded pitching staff in wins each of the last three seasons.  This year he was an all-star for the first time since 2013 in Oakland.  His hitting has improved so much that he’s no longer the butt of the joke.  No longer is the 5’11, 285 pound (lol) right-hander swinging wildly, losing his balance and helmet.  He’s recorded 13 hits in the last two years including his first career home run this year in Petco Park.  One of the toughest stadiums to hit a big fly anywhere in the league.  This moment may have single-handily killed the designated hitter in the National League for a generation.

King Bart has another likely first this year, a Gold Glove.  Having already picked up a Cy Young Award in 2005 with the Los Angeles Angels, this is the last major award that has eluded Colon.  At one point this season, he led all pitchers in SABR defensive index and in defensive runs saved.

America loves a fat guy succeeding in sports.  It’s why we jump out of our seats when a defensive lineman picks off a pass or recovers a fumble on the move.  Part of Bart’s charm is his size for sure, but he’s also a positive, smiling face in the dugout.  An ace-turned journeyman in search of a home.  A former power pitcher who aged into a back-end of the rotation starter who uses his mind to outwit hitters with just one pitch. His fastball.  His attitude and success on the mound are even more important for his persona.  How else could we look past his positive test for performance enhancing drugs in 2012?

Big Sexy has been the rock you hope a veteran will be at the end of his career.  He’s been more successful than Sandy Alderson or Terry Collins could have ever hoped.  I hope they’ll bring him back for one more year, what Colon has said could be his last in the major leagues.  With questions about the young staff’s future, the wily right-hander has proven he’s more than capable of giving us the security of a quality performance each and every time he takes the mound.

Terry Collins said this year he “didn’t know where we’d be” without Bartolo Colon.  I don’t want to find out next year.