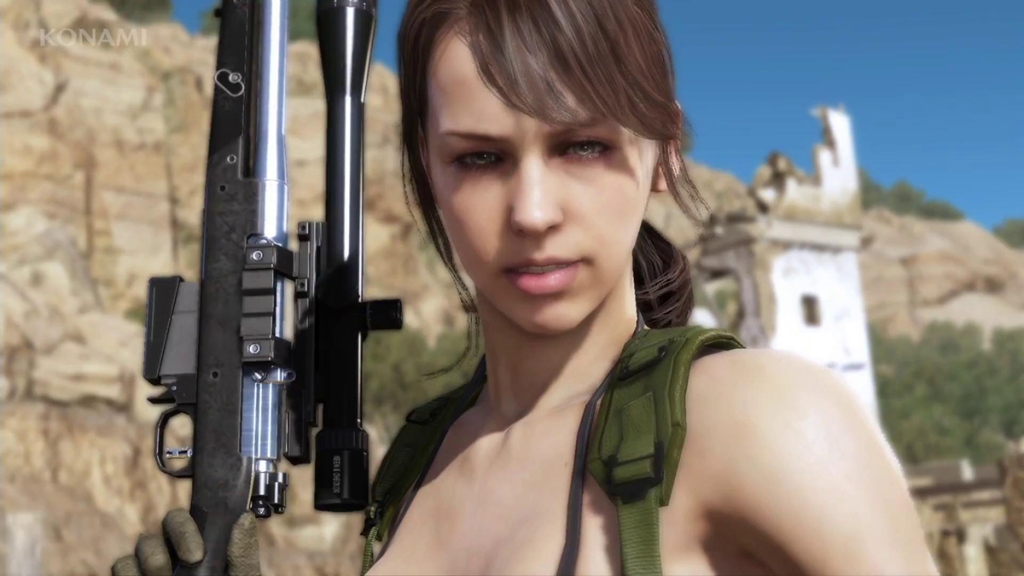 Metal Gear Solid V: The Phantom Pain is one of the greatest video games ever made. I have put over 50 hours into it and am still not even finished with the main story. It is a mind-blowing experience, one of the rare moments where a video game really pushes the boundaries and can be taken seriously. I am going to write another piece on how much I love the game when I finally wrap up the story.

For now, I want to talk about the one really, really stupid thing that brings the game down. For all of the really cool stuff that shows what a video game can be at its best, the appearance of the character Quiet is one of the dumbest things I’ve seen in any medium in a long time.

We live in a time where the role of women in movies and video games has come under intense scrutiny. Every little thing Black Widow did and said in the most recent Avengers flick was picked apart to death to see if it set women back. One of the big selling points for Mad Max: Fury Road was its strong female characters. People simply want to see better female characters.

Then along comes Quiet, the near-naked sniper who doesn’t even speak. There was outcry when the character was revealed since it was pretty clear game director Hideo Kojima just wanted to introduce some naked chick with big boobs so horned up dudes playing the game would get all excited. Kojima even said the point of the look is to make you buy the toy or cosplay as her.

There it is. If you’re a guy, you can buy the toy and touch her plastic breasts. If you’re a lady and want to dress up for a convention or something, in the words of Kanye West, “let ‘em out, free at last.” Stupid.

Kojima then went on to tell the critics that as you play the game and learn why she looks the way she does, “you will feel ashamed of your words & deeds.”

I’m going to try my best not to sit here and lecture you about the need for strong female characters who are so much more than sex objects, since I’m going to assume you are rational and already recognize there is a need for that. Instead, I will simply say: Quiet’s appearance and the explanation for it are both brutally fucking stupid and make me embarrassed to be a gamer.

People who play video games get a bad rap. You’re either thought of as some Mountain Dew-obsessed, Call of Duty-loving bro dude, or some basement-dwelling, socially inept RPG guy. It is also assumed you like to look at animated ladies because you don’t speak to women in real life. If somebody walks in the room while you’re playing MGS and sees Quiet, it doesn’t do much to stop people from shaking their head.

The Phantom Pain is supposed to be this epic tale of revenge. Granted, MGS is a game series where you can hide yourself in a cardboard box that you pull out of your back pocket, so it isn’t always the most serious. But this game does have a pretty dark and serious tone, and it has a really fascinating story. Sadly, it is hard to always take it seriously when you’ve got a naked chick following you around.

The game revolves around managing your own private army, gathering resources, and going out in the field to whoop some ass. Quiet is one of the “buddies” you can take out in the field with you. Here you are, as Snake, in full combat garb. There’s Quiet, walking around in torn up stockings with a thong and a little bra. It is ridiculous.

You can unlock clothes for her, but you have to play through most of the story and spend a massive amount of resources on the outfit. And then when you deploy for your mission, you have to spend resources based on what gear you bring into the field. Quiet’s clothes cost a shit ton to equip, so it is almost like you’re being punished for trying to dress her up.

As you’re encouraged to take this scantily-clad soldier with you, you’re treated to a little show in your helicopter command center. As you sift through mission orders, Quiet rolls around and poses like a pin-up girl on the seat in front of you, putting on a little show. Some idiot made a 10 minute video out of it with some music.

You get an explanation for Quiet’s appearance not long after recruiting her. You see, she breathes and feeds through her skin. Photosynthesis and all that. Wearing clothes would simply kill her! No explanation seems to be given as to why the End, a sniper in MGS 3, had photosynthetic abilities but could wear clothes.

Oh right. The explanation is the End was a dude and didn’t have big tits.

And the fact Quiet’s clothes cost so much makes it clear that having her dress up isn’t “canon” or anything.

Isn’t this all so stupid? Like they sat around and said, “Bro, what if we have this smoking hot chick, right? But she can never wear clothes because she’ll die!” Many middle schoolers have come up with that same idea for a character, I’m pretty sure.

And to make it better, Quiet doesn’t even talk. She is really there just to be a sex object. They explain why she doesn’t speak, and it does make sense in the context of the game, but when you have one female character in the entire story and she’s walking around without any clothes and can’t speak, it is pretty ridiculous, stupid and offensive.

The whole never speaking part of Quiet’s story is actually interesting and serves a larger purpose in the game. The photosynthesis and need to be without clothes are both absurd and feel shoehorned in so there can be some flesh to get some bros excited. That is so idiotic.

Contrary to Kojima’s prediction, I do not feel ashamed of my words of discontent towards Quiet’s appearance. If anything, I’m more embarrassed I have to work with a woman that looks like a stripper. Everything else about this game is so well-done and incredible, but then they had to go throw in the woman with her boobs hanging out for no reason other than to be “sexy.”

They’d never design a woman that looks like Rebel Wilson to do this with. There is literally no reason for Quiet’s appearance to be like this.

As a grown man who spends roughly one metric fuck ton on games each year, I play video games for the story. I’m constantly in search of deep and clever storytelling. I’m not looking for computer animated eye candy that gets middle school boys all boned up and makes them hide the game from their parents.

Of course somebody will say, “Joe! She’s so hot! And modeled after a real person! How can you not like this?” To that I say: Quiet is not a real person, just pixels. There’s this incredible thing called the internet, which you can use to look up real women who are wearing as little or maybe even less than Quiet, if that’s what you’re looking for. I don’t need that forced into a game that is already a boys club and turn it into a teenage boy’s wank fest.

But maybe I’m way off on all of this. I’m not even done with the story, so maybe there is some huge reveal that will clear everything up and make me feel ashamed of my words, as Kojima said we would. But I doubt it.