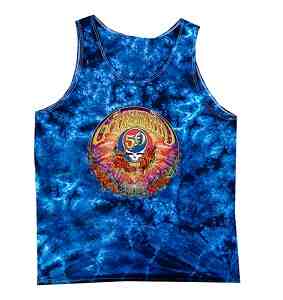 I’m a little late to the whole being a Deadhead thing, and by “a little late” I mean that I didn’t start actively and regularly listening to the Grateful Dead until after my 30th birthday. In fact, if you were to tell me 10 years ago this would happen, I would have been a real disbelieving dick about it.

Usually, your college years are when you loosen up, broaden your horizons, swallow hallucinogenics and go through a jam band phase. Mine were the opposite. I was crushing a steady diet of solitary angst set to a soundtrack Slayer, Pantera, Black Flag and the Rollins Band, with an occasional James Brown or Stax Records sampler chaser to get the funk out.

This started to change a little toward the end of college. There’s probably a direct correlation between this and entering into a steady relationship, but let’s just chalk it up to maturation as well as emotional fulfillment.

That isn’t to say I still don’t enjoy that music. I do, but my palette has gotten a bit more abstract. Tom Waits, Frank Zappa, Funkadelic are all regular plays on the Shahen Spotify sessions.

And now, the Grateful Dead joins that list. It was a slow burn, starting with the band’s eponymous debut, since that was minimal on jamming and more focused on drugged-out ’60s rock. Then it was American Beauty and it’s intricate country-folkiness. As far as I was concerned, if I stuck with some of the studio albums, I wasn’t a real Dead fan and hadn’t become one of those people gushing about 25-minute jams.

Then, it happened. I listened to the self-titled live album. I was sold. I loved the Chuck Berry and Buddy Holly covers; I dug the extended jamming. I followed it up by listening to the multi-disc recording of Filmore East shows this album picked tracks from. I listened to Live/Dead and lost my shit over the sprawling 15-minute cover of “Turn On Your Love Light.” I bought Europe ’72, Vol. 1 and eyeballed the other umpteen volumes in that series. Basically, I became that guy, riffin’ on how much “Cumberland Blues” is with that live rawness, man.

I bitched when Trey Anastasio replaced Jerry on the “Fare Thee Well” shows this year, because like, fuck Phish, those Dead-wannabes. But I still watched as many illegal streams of it on YouTube as I could.

I finally cemented my fandom the way I always do when I’m willing to publicly declare which musicians receive my endorsement: I bought a t-shirt.

Actually it was a tank top, blue tie-dye with the Grateful Dead skull logo in the middle. I bought it at a flea market while on vacation in Wellfleet, MA for $18 from a middle-age hippie lady hocking tie dye and beads out of her van.

Then, a funny thing happened: people saw me in this ill-fitting low-cut men’s tank top and initiated a conversation about the Dead.

Usually, people don’t just randomly talk to me. There’s been some exceptions of course, like whenever I go to a Barnes and Noble or Borders (RIP), there’s a good chance the cashier will ask me about my choice in Bukowski books or Isaac Hayes albums. Yes, I know I’m a walking hipster-cliche and name-dropped a ton of shit throughout this to sound sophisticated and urbane. It happens.

The only other time I’ve experienced this over clothing was with a shirt I had in college. It had Chuck Norris’s beautiful face emblazoned in the middle with the words “I don’t need a weapon – I am one” circled around it. People would compliment it or engage in a conversation about the Chuckster much more often than I would expect from something so ridiculous.

Occasionally people may point to my Nikola Tesla shirt and say, “Right on” or something to that effect, but by and large, the pop culture pastiche that is my t-shirt collection goes ignored.

Until now. First example coming up:

While still on this vacation, we ran into a stretch of hot and humid weather on Cape Cod, so the Dead tank got some serious wear.

One night, my wife and I took our toddler to the playground near the house we rented for the week. When you’re on vacation with a baby, the vacation strategy and what constitutes fun change. Watching your 14-month old climb up steps, crawl through tunnels and go down slides for the first time become entertainment and create moments you’ll never forget. The little monster you brought into the world is growing up, interacting with his environment and having real fun. It’s wild and something that you don’t ever fully understand until you have a child of your own and see it happen.

In the middle of having a mushy dad moment and ensuring my son doesn’t launch himself off the playground equipment, I made a new friend. He was a normal-looking middle-age guy with a daughter who looked to be about kindergarten-aged.

As my son was readying to take a header down a slide, he spoke to me.

“Nope, I met up with some friends and caught one of them on pay-per-view at a bar,” he replied. “You watch any of ’em?”

“Oh yeah, I saw bits and pieces online. It’s a bummer actually, I didn’t really get into the Dead until this year.”

So while we were making sure our respective children didn’t do themselves bodily harm, we chatted for a bit. It turned out he was a Cape Cod local, from nearby Truro. Also turned out, he’d been to Albany (my adopted hometown when traveling, for contextual purposes) about a dozen times, between Dead, Ratdog, Furthur and other assorted Grateful Dead-centric projects. We talked about parenthood, life on Cape Cod and what-have-you. It was a pretty cool non-touristy human interaction.

I reviewed Brad Paisley at the Saratoga Performing Arts Center. My brother was my plus one. He wore the Rolling Stones tongue logo t-shirt he’s owned since high school and since it was about 90 degrees with a comparable dewpoint, I broke out the tank top.

To get my tickets, I have to stop at what’s called the Charlie Gate. As we grabbed our tickets, the 50something security guard stopped us.

“Oh man, you guys are wearing shirts of my two favorite bands! I never got to see the Stones though. They had a lottery system. You had to write your name on an index card and mail it in to even get a chance of having the ability to buy a ticket.”

“Yeah, oh well. I’ve seen the Dead about 20 times though. Those were some times, man.”

We all exchanged some laughter and went on our merry way. I thought the dude was maybe just making some small talk with us, but he definitely was only chatting with his fellow security prior and immediately following that moment.

There’s other stories. The quiet nod of approval shared with some random dude in a suit and Dead baseball cap, the story I heard from a former boss about a new friendship started in a golf foursome forged out of a mutual Dead appreciation.

I think this a phenomenon unique to the Grateful Dead. The mass commercialization of the alternative acts of the ’60s and ’70s is everywhere – you can go to a big box retailer and get a Stones, Beatles, Hendrix, Marley, Ramones or Dead shirt for $7.50. But no one stops you in the street to strike up a conversation about your “Redemption Song” swag. If you have a tie dye shirt with teddy bears in a giant circle, you are  guaranteed a glimpse into at least one person’s life and concertgoing ways.

I guess this is part of the Dead’s legacy, something I once scoffed at as a bunch of hippie stoner bullshit. Clearly, I just didn’t get that the camaraderie and depth of feeling toward the band goes well beyond seeing a few shows or liking “Casey Jones.” It seems to be an experience akin to how a Springsteen show makes you feel like you’re part of something singularly special. A Bruce concert, however, is a one-night phenomenon that you’ll always remember for its power and how you felt the moment the house lights turn on for “Born to Run” and 15,000 people sing along. Evidently being a Dead fan is like that, but with it comes the expectation that if you run into another fan, you aren’t strangers; you’re part of the same extended family.