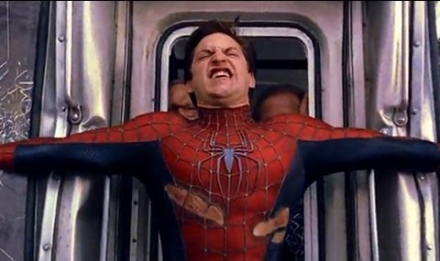 Remember that scene in the monumentally overrated Spider-Man 2 where our friendly neighborhood web-head loses his mask while rescuing a train full of people from Doctor Octopus? He passes out from the strain of stopping said train and all the passengers carry his body to safety in a Jesus Christ pose. As he wakes and realizes his mask is gone, two little kids appear with the mask and say, “We won’t tell nobody,” as the rest of the passengers smile and nod.

This scene embodies the single biggest issue that has plagued literally all five Spider-Man films: Spider-Man’s secret identity is constantly revealed to the point that it is comical and hurts the movies rather than add the intended dramatic effect. It is actually far worse than this scene makes it out to be since it isn’t usually just random people seeing his face, it is usually the villain or the people he’s trying to protect by keeping his identity secret in the first place.

You do it once, it is kind of wild. You do it 11 times, it is ridiculous and needs to stop. Check out how nuts this is:

Spider-Man (2002)
While battling the Green Goblin on Thanksgiving, Spider-Man gets all cut up before heading to dinner with his Aunt May, his best friend Harry, Mary Jane, and Harry’s dad Norman. Little does Spider-Man know, but Norman is the Green Goblin. Norman notices a cut on Peter’s arm and deduces that Peter is Spider-Man and sets out to destroy everything Peter loves (Identity Reveal 1). In their final battle, Peter discovers the Goblin’s identity, and then Norman is impaled by his own glider during the fight. Peter brings Norman’s body back to Chez Osborn and hides the Goblin stuff, but Harry sees Spider-Man standing over his dead dad. That sets up…

Spider-Man 2 (2004)
Here’s where things start getting out of hand. Harry Osborn, now running his father’s corporation, decides he has to kill Spider-Man for killing his father. Meanwhile, Peter befriends scientist Otto Octavious, only Otto is caught in some terrible accident that leaves him with mechanical octopus tentacle arms forever attached to his body. Through some shenanigans, Harry agrees to help Doctor Octopus with his evil scheme in exchange for Spider-Man. Harry tells Doc Ock that Peter takes pictures of Spidey for The Daily Bugle, so Doc Ock kidnaps Peter’s gal pal Mary Jane and tells Peter to contact Spider-Man.

Immediately after the aforementioned train scene (Identity Reveal 2), Doc Ock shows up again, lays out Spidey, ties him up and delivers him to Harry. Knife in hand, Harry is going to stab Spider-Man, but decides to rip his mask off first, only to find it is his best friend (Identity Reveal 3). Harry is dumbfounded, Peter simply leaves to go stop Doc Ock, who hasn’t let Mary Jane go for some reason.

As Doc Ock is about to level the city with his evil villain machine, Spider-Man takes off his mask to reveal his true identity to Doc Ock and use their friendship to convince Otto to help him stop the machine from destroying the city (Identity Reveal 4).

Then he turns around to reveal his face to Mary Jane (Identity Reveal 5) and saves her from the melee. Then Harry discovers his father was the Goblin and Mary Jane ditches her fiance at the altar to be with Peter. Now we arrive at…

Spider-Man 3 (2007)
One of the worst films in the history of cinema, Spider-Man 3 is a bit hazy in this writer’s memory as it is so bad I have only seen it twice, and not anytime recently. To the best of my memory, this is what happened.

Peter is going crazy as he is possessed by this black alien costume, or as we nerds know it: the symbiote. Harry has gone full crazy evil and makes Mary Jane break up with Peter. Peter goes full heel due to the dark powers of this alien suit and ruins rival photographer Eddie Brock’s career or life or both maybe. As Brock goes to church to pray that God will kill Peter Parker, Peter is actually up in the bell tower using the sound waves to get the alien suit off.

Brock sees Peter (Identity Reveal 6), and the costume falls on Brock and turns him into Venom. Brock then teams up with Sandman, and Harry learns that his dad actually wasn’t murdered by Spider-Man so he teams up with Peter. Venom is destroyed, Harry is mortally wounded, and Spider-Man loses his mask during the fight so now Sandman knows Peter Parker is Spider-Man (Identity Reveal 7). And then Sandman reveals these hidden truths about the night Peter’s Uncle Ben was killed and it is all stupid. This was a very bad movie. It was such a mess it led to the reboot…

The Amazing Spider-Man (2012)
A whole new look at the origin story we had seen ten years prior, TASM underwhelmed majorly. But don’t worry: new series, same identity crisis. After dinner at Gwen Stacy’s house, Peter, being a brilliant high schooler and trying to impress his girlfriend or something, reveals to her that he is Spider-Man (Identity Reveal 8). Later, being a brilliant high schooler, he pursues the Lizard in the sewers and confronts him, only Spider-Man messes up and leaves his camera with Peter Parker’s name on it down there, revealing his identity to Lizard (Identity Reveal 9).

During the final battle, Spider-Man loses his mask somehow, exposing his identity to his girlfriend’s father, who is captain of the police force (Identity Reveal 10). Captain Stacy dies, and the movie ends shortly after. That brings us to…

The Amazing Spider-Man 2 (2014)
Surprisingly tame in the Identity Reveal department. Peter rekindles his friendship with Harry Osborn, who wants Spider-Man’s blood since it may be the key to curing some rare hereditary disorder that killed Harry’s dad and is killing him. Knowing Peter takes pictures of Spidey for The Daily Bugle, he wants Peter’s help. Peter shows up dressed as Spider-Man and tells Harry no, the risks are too great.

While Spider-Man is battling Electro, somehow Harry deduces that Peter is Spider-Man (Identity Reveal 11) and kills Gwen Stacy. This movie was lacking.

The Future of Spider-Man in Film
Those five Spidey flicks were made by Sony, but now a deal has been reached with Disney to allow Spider-Man to finally join the ridiculously popular Marvel Cinematic Universe. A new actor will be cast and he’ll make his debut in next year’s Captain America: Civil War, based on the big comic event. This makes the situation even better.

In Civil War, Captain America and Iron Man are at odds over heroes registering with the government, and the pro-registration Iron Man gets Spider-Man to go on television and reveal his identity to the world!

That’s right, folks. In six film appearances, we could be looking at 12 Secret Identity Reveals. There is no other superhero that can lay claim to something so incredible, and the legend can only grow from here. Film appearances have managed to turn Spider-Man from a great hero into one of the worst heroes in the world since he can’t even stick to the first rule of being a superhero and protect his secret identity.

Luckily, Marvel seems to be doing everything right with their movies, so maybe they’ll do the right thing and spare us yet another instance of people finding out Peter Parker is Spider-Man and making his life miserable for it. But with the source material for the next movie what it is, things don’t look great.